MeatballWiki | RecentChanges | Random Page | Indices | Categories
This is a suggested minimal model of the roles in an online community, defining roles and transitions between roles. 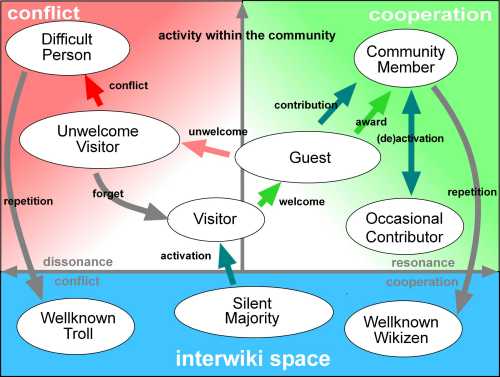 The model is intended:

Positive roles and transitions from them:

Negative roles and transitions from them:

The purpose of the role model is to build trust beyond individual interactions. The roles define acceptable behaviour and expectations in a kind of objective way. People are able to observe and compare. It's easy to stay within the boundaries of roles, thereby build trust, advance within the community and choose a fitting role. It's much easier than without a role model.

Therefore a role model is not about restricting freedoms. You can compare this to a system of roads. Typically we see roads as an advantage, because we can reach our goals faster than without them, although we are not as free to choose our way as (without roads) in the wilderness. To observe and design a sensible or workable role model may mean to build social highways.

Note that such a system is not hierarchical in nature. It may contain a hierarchy (for example different types of members) but it needn't. Within most online communities such a role model would reduce hierarchical phenomena, because a system of peers (members) is able to replace the natural hierarchical system of powers (owner, founder/host, more or less trusted people).

After writing SuggestedWikiRoleModel (probably early 2004?) there was little feedback or discussion. I felt that the model changed the way people looked at things, but in very subtle ways, so I was never sure about it. At WikiSym I got a lot of positive feedback which encourages me to rework the model. -- HelmutLeitner

I liked your wiki role model. I still think it would be fun and useful to try to build a 'flowchart' that traces how a person's role might change over time. You can start small and upgrade the model over time to include cases as they arrive, and perhaps even weight paths with statistical data. -- SunirShah

Yes, such a flowchart would be nice. I'm just short on time, at the moment. -- HelmutLeitner

Nice job on flowcharting SuggestedWikiRoleModel, Helmut :) I'm curious why "respected wikizen" is considered outside the community, though. -- ChrisPurcell

Chris, would "Activity in the interwiki space" be clearer? RespectedWikizen? was a result of drawing the diagram, there was an open space and it seemed logical to fill it that way. Would WellknownWikizen? be better? -- HelmutLeitner

You need a third axis for "activity outside the community", perhaps? Of course, that always makes 2D drawings harder. -- ChrisPurcell

Put the bubble on the axis. The point is that wikizen bridges inside and outside the community. -- SunirShah

I really love the flowchart! -- SunirShah

Thank you. Shouldn't we have a way to create such diagrams and have them editable by everyone the wiki way? It's a form of power to draw such things and put them into a jpg. I used Freehand, what do you use for such purposes? -- HelmutLeitner

Yes. CollaborativeGraphicDesign would be nice. FireFox? will soon support SVG natively, making this possible. Alternatively, we could use Flash. -- SunirShah

Helmut, just to let you know I'd be happy to test a translation of the above diagram. If you drop it anywhere with a source SVG, we could try to work on the SVG source with Inkscape. On my own, I'd just translate the labels. Let's say it's the way we use on CommunityWiki:CategoryDiagram. Not very sophisticated, but it works. -- ChristopheDucamp

Christophe, it's Freehand offering no SVG export. Can you work with Freehand files? Or give me the translations? Or suggest a better software to do such diagrams? -- HelmutLeitner

Bonjour Helmut. I just checked that Freehand can be tested for 30 days evaluation. My first choice : you just drop anywhere the original file (fh. 11). Second choice : In the office, I could also find out Adobe Illustrator. You could export the file as Adobe Illustrator 7.x (.ai). And in the future, may I suggest to test Inkscape[1] a SVG editor even if the [[Inkscape'wiki] let us show Inkscape could still be a work in progress. -- ChristopheDucamp