MeatballWiki | RecentChanges | Random Page | Indices | Categories
[copied from SunirResigns] Well, I can tell you a number of other major problems that are going on in wikidom right now where only "echoes" have reached here. The O'Wiki vs. TWiki dispute, the OpenWiki fork, 142 on Wikipedia, the FrenchWikipedia split, the Case of 'A' on WikiWiki, WikiSpam, the Wiki:WikiBlackList, the disappearance of wiki developers, the flood of WikiMarkupStandardization efforts, the several stalking cases caused by disintermediation, etc. Please tell me I am not the only one paying attention? I am deeply saddened by the decoherence of wikidom, and that is why I now feel that wikis are dead. -- SunirShah

1.1. The disappearance of wiki developers
1.2. CommunityConflict
1.3. Others

1.1. The disappearance of wiki developers

Is this actually true? There are lots of wiki projects. Is the case that some early developers moved on, or is there less development overall. How does this compare to the lifecycle of other tools that attract open source development energy. Good, answerable questions.

Conflicts between members of different OnlineCommunities should not polarize the whole of their respective communities. MeatballWiki and its CommunityMembers should seek to lead by example. The point is to remember "monkey see, monkey do" (see ModelDesiredBehavior and PrincipleOfConstantRespect). Over the course of MeatballWiki's six year history, there have been several CommunityConflict?s that have ended in resentment, loss of CommunityMorale? and CommunityMembers, and attempts to start new OnlineCommunities.

Note: With the liberal MeatballWikiCopyright, authors are free to release their contributions under any license they so desire (PrimarilyPublicDomain, CopyLeft, dual license, etc).

I'm aware of a few of these problems (WikiSpam of course, a bit of 142) and it would be nice to have more information ... but I do not take them so seriously. All problems that exist in society will reach wiki sooner or later - maybe in a transformed way.

Scientifically one can try to step back, describe the problems, try to understand, try solutions, ... it should just be routine work following a methodology. You shouldn't burden yourself emotionally with all problems of our society.

What do you mean by "disappearance of WDs"? I know that CarstenKlapp? (PhpWiki) has disappeared and Cliff in a way disappeared as a developer (but already years ago). Is there more to it? ([Iain Truskett])

I didn't follow recent split / fork developments. But why should we bother when GPL-ed communities that are built to split and fork, do this eventually?

As wiki tools and practices spread, there are many reasons why the larger community would be less cohesive than an early, small pioneering community. Wiki is an effective medium for small to medium sized community groups. Because of this, communities of practice, academic groups, project groups adopt wikis. They may not know about each other. They may not feel a connection to "wikidom" or even know such a thing exists.

Each wiki represents a community. It would stand to reason that some communities would have divergent interests from each other. Wiki is not an ethnic culture in which people are socialized from birth or a political advocacy group with a common need.

If there is a need for an overarching wiki community across subcommunities, the better thing to do here would be to make a case for what wikis have in common, and what wikis have to gain from common interests (common enemies in spammers, common interest in social collaboration processes, linking across wikis, searching across wikis). That would help to build community more than itemizing its absence. -- AdinaLevin

I'm talking about specific people; TheIndividuals rather than a statistical AnIndividual. Many major WikiEngines have seen their lead developers go MIA, and this has put a dampening effect on core wiki development. When I talk about its absence, I'm talking again about specifics, even though I am not naming names. And by the way, I disagree that "wiki is not an ethnic culture". It most certainly was a culture that sought to differentiate itself greatly from the mainstream net culture. That the mainstream has found it has reduced the "SignalToNoiseRatio" (for lack of better wiki name) of the wiki :: mainstream cultural ratio. I mean, sure, that's fine in a way, but that doesn't mean I personally want to start dealing with mainstream net.politics. (e.g. I'm still in favour of UseRealNames.) -- SunirShah

Thinking about wiki developers disappearing... Maybe there's a common progression of discovering wiki, becoming enamored with wiki technology, immersing oneself in traditional wiki culture, and yet eventually remembering that neither traditional wiki culture nor wiki technology are ends in themselves. Nor is better online community an end in itself. The typical zen of wiki almost forces you to remember that.

In some ways that's representative of my own experience. It applies more to my being a disappearing wiki developer than a disappearing wiki shepherd. But it also applies to my occasional wondering what I am still doing here at MeatballWiki; "better online community" is not concrete enough anymore. Right now I think I stick around more for the folks that are here than any other reason. -- anon.

That's so true, Scott. AlexSchroeder was musing earlier this year on his blog how to make money with wikis, and I have to say that I am currently doing that, although what I do is not associated too strongly with the four letter pattern w-i-k-i. For example, working with http://commons.ca; the arts projects I am working on, my Masters degree, FairSoftware, my political interests. All of these initiatives flow from the basic values that revolve around Meatball and have nothing to do with WikiEngines, which are in my opinion no longer that interesting once someone figured out how to write a wiki in 220 characters of Perl. (My FeatureKarma is ashamed.)

I mean, I'm not in undergrad any more, so I am no longer enamoured with computer science and software engineering as disciplines I want to grow into. Hell, I don't even program any more. I have changed a lot from what I was three years ago during the height of Meatball's wiki work, and now I find the idea of OnlineCommunity to be insular and impotent. I want to do shiny, bright, lively, active things now. My interests are around exploring the world and making a real (vs. idealized) difference in people's lives. I'm interested in CommunityOnline, and community as community. My most interesting Meatball-esque conversations are face-to-face, not over the Internet, because I am no longer spending my social time online. The time I do spend online I mostly spend trying to protect my reputation from being immolated by less than savory characters.

I was just thinking about ever so long ago (at the end of 2000, I believe) when we had that "leopard skin psychiatrist couch" discussion with ErikDeBill on my diary, compared to my escapades at the moment, and how I have found myself having too many interesting things to do with too many interesting people.

I cannot really put my finger on it, but I find that trying to express those kinds of things online invites a lot of negativity, and I really wanted to create an environment of optimism, hope, and support. -- SunirShah

I thought that the analizys of all the positive and negative aspects of online communities was the subject of Meatball discussions. You should not turn your back on online after discovering there is some negativity. -- ZbigniewLukasiak

Recently, I've been reading alot of Guzdial-related research into CoWebs? in classroom contexts. It makes loads of sense, and it works. And no, it isn't wikipedia, it's for a smaller community. Recently I brushed up against wiki evangelists who think The Only Wiki is Wikipedia. And eventually, in an ideal world, all the web would be a wiki. The same kind of thought from Cunningham, who says in the canonical book: TheWikiWay, if you're going to lock a wiki, why not just make static web pages? That's silly. Who wants to edit flipping HTML and upload via some clunky FTP? 5 people can have a wiki experience, and no it doesn't have to be open on the web or even attract the attention of any others. Hell, one person can have a wiki experience on their own PersonalWiki. There seems to be alot of WikiZen? evangelism which I think misses the essential point of what works with wikis. Easy to edit hypertext pages, nodes created, easy to make linked relationships. No there's no meta-tags, no semantic taxonomy, but ad-hoc concept clustering. And you can do it all by your elf. I think the WikiWay is smaller and more essential. WikiSpam is destroying one idea of wiki usage, but to me, it is revealing the best bits. -- HeatherJames

Yeah - wiki is just a tool. Five people can find it usefull - why should they not use it? Why should they open it to anyone and cooperate with the whole world when they just need it as a tool for themselves. -- ZbigniewLukasiak

I certainly agree that there are problems, but I also see that there is considerable value in wikis, else I would not be able to justify participating. In my view, Wikis may be a NBNS (NecessaryButNotSufficient?) factor. They are certainly a HBNS (Helpfull, But ...) force. -- HansWobbe

If it is true that "MeatballWiki is in an undefined state right now" and if the same can be said of CommunityWiki [1], why not collectively brainstorm about why this might be the case and how we might find solutions to the problem.

It seems to me that they've just outlived their usefulness, continuously loosing mindshare. There's nothing wrong with that. Welcome to WikiHeaven? (in the lower right corner). 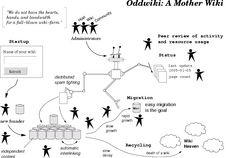 I think there are two reasons:

First, TargetReached. There's not much terribly new to be said about wikis. We need to be out there founding and teaching. There's no point in improving the text (DiminishingReturns?). The small number of people actually needing our help (as judged from the number of requests on either wikis) is an indication of how obsolete we are as a source of active hands-on BarnRaising help. Why is that? Either because people don't find our sites, or because help is easy to come by via different channels.

The second reason, I believe, and this one is just a personal hunch of mine, with no actualy observations to back this up, is that the communities themselves are fragmenting themselves, with ever decreasing overlap in interest between the various people. Such is life. We're just all engaged elsewhere, waiting for a chance new arrival that sparks a new controversy, that injects some new enthusiasm in old topics, that introduces new topics.

Either way, I don't think that brainstorming will help. Should you be at WikiSym 2006, however, I'd be happy to talk to you about it. :) -- AlexSchroeder

I actually think there is a lot more to be said. So far, there has been only one wiki to grow to the size of Wikipedia. We need to grow more, or else Wikipedia, Wiki Media Foundation, and Wikia will be all that matters in the public wikidom. Judging from the crowd at WikiSym 2006, Alex included (and perhaps especially), there is a growing and palpable sense of fatalism growing in the face of this potential outcome. The PygmalionEffect continues to dominate, though; if we believe it is pointless, it becomes pointless. However, large, non-Wikipedia sites like WikiTravel and WikiHow? and even MemoryAlpha show that there still is need to understand scientifically how to repeatedly grow successful wikis. ??? -- SunirShah